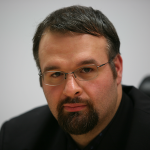 Marc Rogers is the VP of Cybersecurity at Okta. With a career that spans more than twenty years, he has been hacking since the 80’s and is now a well known whitehat who has hacked things like Apple’s TouchID and Tesla’s Model S sport’s car. Prior to Okta, Marc served as the Head of Security for Cloudflare, he was a CISO in South Korea, co-founded a disruptive Bay Area startup, and spent decade managing security for the UK operator, Vodafone. In his role as a technical advisor on “Mr. Robot,” he helped create hacks for the TV show. Finally, as if that’s not enough, he is also the Head of Security for the world’s largest hacking conference: DEF CON.