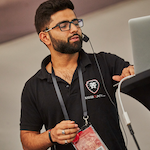 Himanshu Sharma, has been in the field of bug bounty since 2009 and has been listed in Apple, Google, Microsoft, Facebook, Adobe, Uber, AT&T, Avira, and many more with hall of fame listings as proofs. . He has helped celebrities such as Harbhajan Singh in recovering their hacked accounts, and also assisted an international singer in tracking down his hacked account and recovering it. He has been a speaker at multiple international conferences Botconf ’13, Confidence 2018 and RSA Asia Pacific and Japan ’18 . He also spoke at IEEE Conference in California and Malaysia as well as for TedX. Currently, he is the cofounder of BugsBounty, a crowd-sourced security platform for ethical hackers and companies interested in cyber services. He also authored a book on Kali Linux titled “Kali Linux – An Ethical Hacker’s Cookbook”