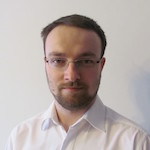 Dawid Czagan (@dawidczagan) has found security vulnerabilities in Google, Yahoo, Mozilla, Microsoft, Twitter, BlackBerry and other companies. Due to the severity of many bugs, he received numerous awards for his findings.

Dawid is founder and CEO at Silesia Security Lab, which delivers specialized security auditing and training services. He also works as Security Architect at Future Processing.

To find out about the latest in Dawid’s work, you are invited to visit his blog and follow him on Twitter (@dawidczagan).