Tegra is a system on a chip (SoC) series developed by Nvidia for mobile devices such as smartphones, personal digital assistants, and mobile Internet devices.

Nvidia targeted Tegra as the fastest mobile processor in the world. 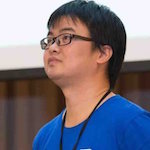