Due to legal pressure from the manufacturers affected, Gianni Gnesa has decided to cancel his talk.

Surveillance cameras have become mundane and commonplace in modern life. They are used in banks, stores, trains, and open areas as an aid to protect citizens and improve security. In fact, whether you are walking into a bank, driving through an intersection or stopping at a convenience store for a snack, there is a good chance that a camera is watching you.

The sole idea of being constantly watched may raise concerns among people who cares about privacy, but as long as the videos are being watched only by authorities, it should not alarm you. The question is: are we sure these surveillance cameras can only be accessed by “good” people? what happens when the surveillance cameras that are supposed to “protect us” are not secure? Could criminals get along with crimes without leaving any trace? 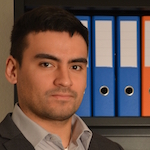